What is Barcelona Comic?

The Comic Barcelona fair is a comic event organized by Ficomic since 1988. Comic authors, editors and readers come to this festival and constitutes an important reference for the Catalan and Spanish comedian. It aims to give visibility, dissemination and promotion to comics and manga.

Where and when is the Barcelona 2020 Comic Fair?

The Barcelona 2020 Comic Fair will be held on 8.9 and 10 May at the Fira Barcelona. The festival will last three days open to the public although on Thursday it will only be open to professionals to generate Networking.

Some data from the Barcelona 2019 Comic Fair

This year two new spaces have been created:

. What activities to do in Comic Barcelona 2020?

Some of the exhibitions planned for Comic Barcelona 2020 will be the celebration of the 50th anniversary of the publication in Spain of Mafalda, the iconic character created by Quino. Another activity will be the exhibition of the boom of children's and youth comics. There will also be an exhibition starring 'El vecino', the comic series by screenwriter Santiago Garcia and cartoonist Pepo Pérez. In addition to two samples about the winners of the 2019 Grand Prix, Antonio Altarriba and the best work by the Spanish author, '¡Universo!', By Albert Monteys.

The different activities are separated into the following sections:

It is consolidated at the 38 Comic Barcelona as a space for networking, thinking, action and opportunities for the sector. Comic Pro is made up of three important axes: professional conferences, portfolio reviews and the rights market.

This area is intended to be fun for the little ones to learn to observe the world in which they live through comics in a didactic and original way. It will have activities such as Comic Workshop where the little ones will create comics; Comicplay where there will be games dedicated to comics; Pintacaras, where children will dress up as their favorite characters; Comic sheet metal to draw and create a custom sheet metal; ComicTeca, a comic library.

Exhibitions such as those mentioned above, 50 years of mafalda in Spain, the universe of Albert Monteys, children's and youth comics, Altarriba, among others.

section will feature competitions for youth and children as well as activities and workshops for schools.

Section to discover, find and above all play games in the middle of the digital era: role-playing clubs, card games, wargames, exhibitions, round tables, demonstrations, presentations, presence of publishers, designers and illustrators of games ...

It has become the R&D of the audiovisual medium. Adaptations of bullets in real image. This section was born as a fundamental reflection of this unstoppable movement: the relationship between sequential and cinematographic art. Professionals from the comedian and audiovisual media who collaborate on a daily basis and who have assigned works of interest will gather.

If you are thinking of exhibiting at the Cómics Barcelona 2020 fair, at Pressing we provide you with everything you need to make your business stand unique and striking. 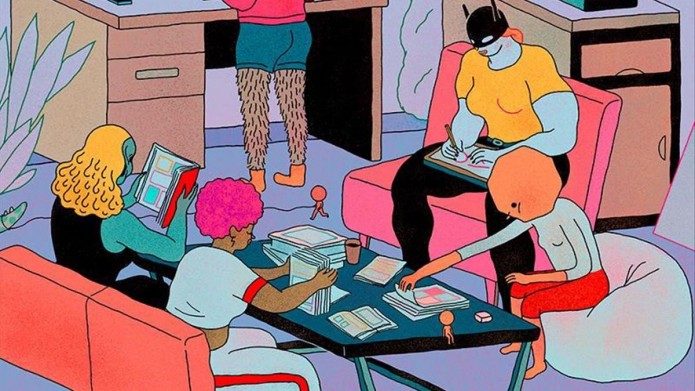